The Elbtower – a unique high-rise by David Chipperfield

The finale and overture at the same time: the Elbe Tower in Hamburg will be the conclusion of HafenCity’s development and simultaneously the prelude to the entrance to Hamburg’s city center and the future urban development areas of Billebogen and Grasbrook. Less than a year after the first announcement of Hamburg’s plans for a high-rise building on the Elbe bridges in HafenCity, building owners and architects are now certain. Following the design by David Chipperfield Architects, SIGNA Prime Selection AG will implement the project.

In the future, the Elbtower will take its place almost as a matter of course as an increasingly familiar part of Hamburg’s urban landscape, forming a – privately built and financed – sculptural urban counterpart to the Elbphilharmonie. It was the design’s great iconographic power coupled with a respectful incorporation into Hamburg’s built environment that convinced the jury assessing the three best bidder offers and purchase agreements on January 31, 2018.

The Elbtower is neither an architectural diva nor does it symbolize an architectural extravaganza. Its distinguished and elegant form creates a surprising interplay from every angle and enters into lively dialog with the neighborhood.

The building is suited on an almost triangular plot amid major infrastructure (rail tracks, roads) and directly adjacent to the first bridging point over the River Elbe. The tower soars upwards from a broad, triangular base, four to five stories high, that takes up the majority of the plot. The tower’s structural form is composed of an interplay between concave building contours. 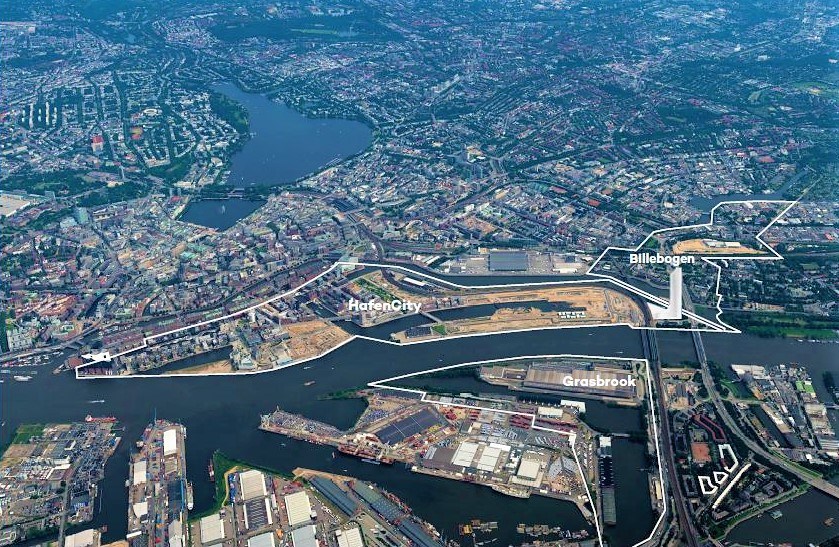 Aerial image of Elbtower and HafenCity. Copyright: All rights reserved.

Seen from the east the building has an upwardly divergent form; seen from the west its low-rise construction echoes buildings in HafenCity as it appears to step back from the adjacent rapid transit tracks. Because of the site’s high exposure to noise and wind, there will be no large open space here; instead a protected, enclosed urban area with a central square will be created in the low four-story part of the building that faces southwest.

A new icon for Hamburg

It is not just the iconographic effect of the building over distance that makes it important for Hamburg. Together with the new Elbbrücken subway and rapid transit station it will become a new urban hub with an influence reaching into the new urban development areas of Billebogen and Grasbrook.

When tenders were invited for the plot a great deal of value was already attached to effective public uses in the base of the building. The Elbtower will be a mixed-use high-rise with more than 100,000 m² gross floor area, extending upwards from a public, diversely used base containing entertainment and education areas, retailing and catering, via semi-public uses such as hotel, boarding house, fitness and wellness areas, “Kinderland” and co-working space, to modern, flexibly designed office accommodation in the tower stories. The building’s social and communication meeting point is its naturally lit roofed-in atrium. All routes cross this light inner space that will be a focal point giving the Elbtower its identity. Because of the extremely high noise levels in this location, the developer has opted not to propose any residential use.

The west view on the Elbtower. Copyright: SIGNA Chipperfield for HafenCity Hamburg GmbH.

Additionally, the Elbtower fulfils the highest sustainability criteria. It will receive HafenCity’s platinum Ecolabel and will be integrated into eastern HafenCity’s ambitious smart mobility concept.

Franz-Josef Höing, the new chief planning officer of Hamburg, said that the selected project by Chipperfield Architects promises to be a tall and elegant house in this centrally located location on the Elbe bridges. The beautiful, slender tower presents itself very differently depending on the viewing direction. In its finesse and filigree façade as well as its white texture, it ties in with the Hanseatic tradition of the white city on the waterfront.

At 235 meters, the Elbtower will be an unmistakable focal point in central Hamburg. Construction could get under way 2021, with opening in 2025 or 2026.

First image: The Elbtower, as seen from the Elbpark. Copyright: SIGNA Chipperfield for HafenCity Hamburg GmbH.

Skewed dudes in the Basel’s Dreispitz
On the Other Side: New Architecture on the Shores of Brooklyn and Queens