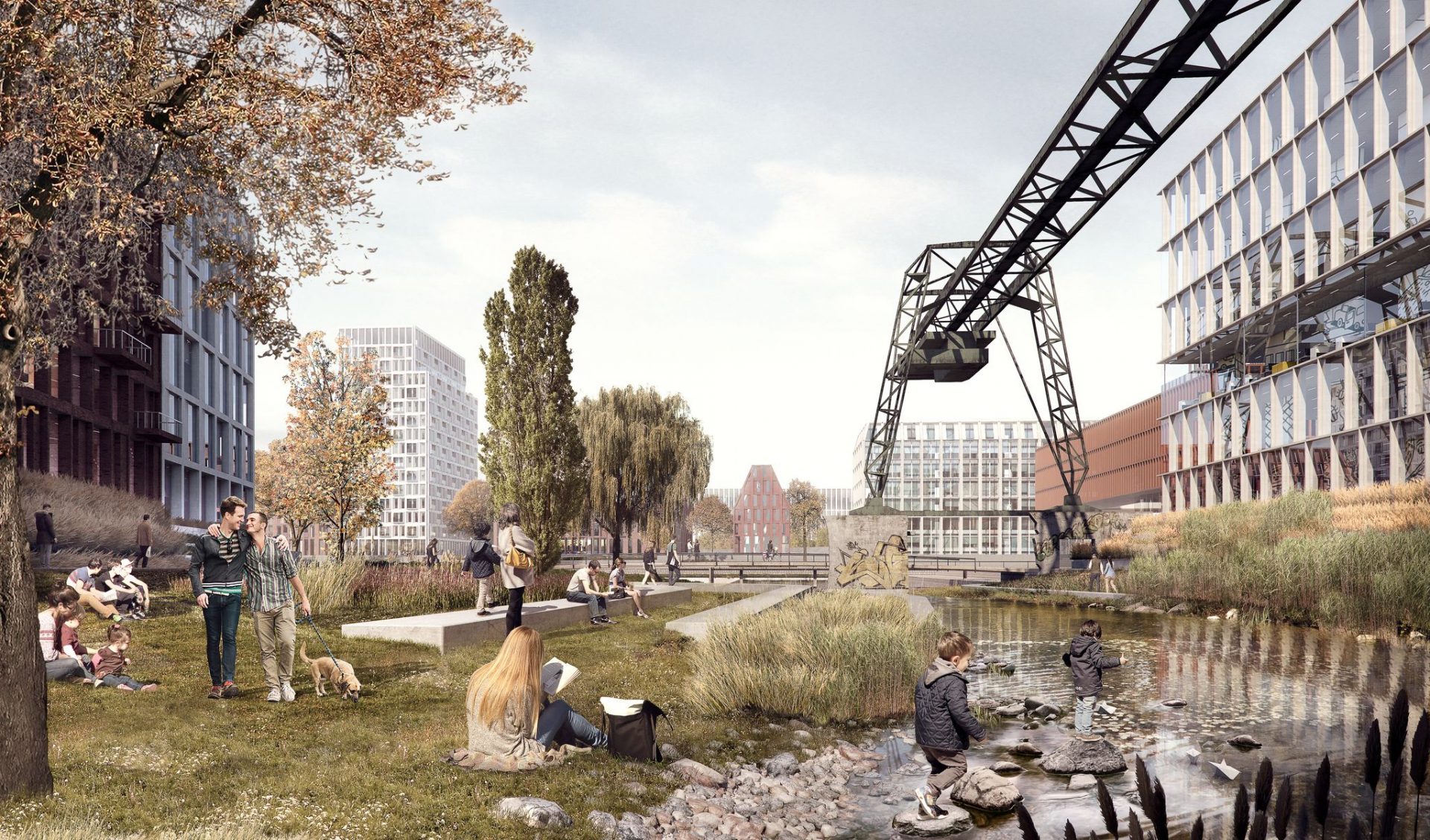 It’s great to have a harbor in the city! Cologne even has five and yet does not see itself as a harbor city, which may be due to the fact that they are on a river and not on the sea. One of them – the Rheinauhafen on the left bank of the Rhine – has been populated with residential and office buildings for 15 years. On the right-hand side – in the port of Deutz – the excavators are at the starting blocks.

The planning did not go quickly – it has never been quick in Cologne – but it is an extensive project, with an area of almost 38 hectares (including 8 hectares of water), 3,000 apartments and 6,000 working places. The integrated plan of cobe (Copenhagen, Berlin) emerged from a cooperative workshop process, on the basis of which the development plans are now being drawn up. 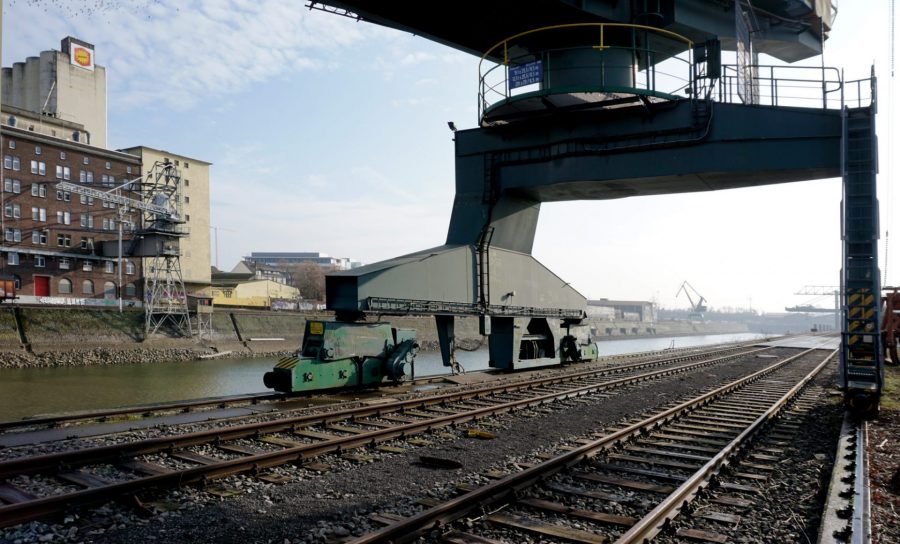 There is still silence over the fallow land. Three thousand new appartements are to be built here in the next year. Photo by: ©Barbara Schlei

The developer is the urban development company moderne stadt, which is now starting the tenders for the 27 building sites. The two mills, most of which date from the 1950s and 60s, will be the first to begin construction. They are the only noteworthy existing buildings in the port. Interested investors must apply with a design and usage concept that corresponds to the requirements of the integrated plan: The “Deutz mix” which also includes a social component. Freely financed, subsidized and price-reduced living accommodation should coexist – and that’s per block! 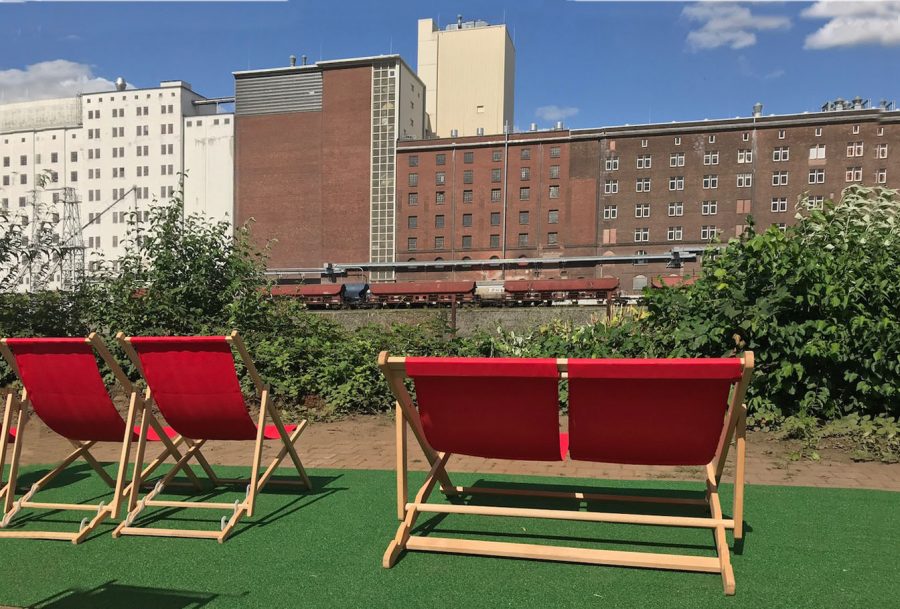 For the two mills, most of which date from the 1950s and 60s, the tenders for the transformation will take place this year. Photo by: ©Barbara Schlei

But of course, cobe’s plans also aim to bring design diversity to the residential harbor. Each block should be composed of different building types. The design of open spaces is particularly important in the new city district, because thanks to its direct location on the Rhine, it will be visited by a lot of people. A pool on top of the basin, a large public park and cafes and restaurants on the former docks should take this into account. 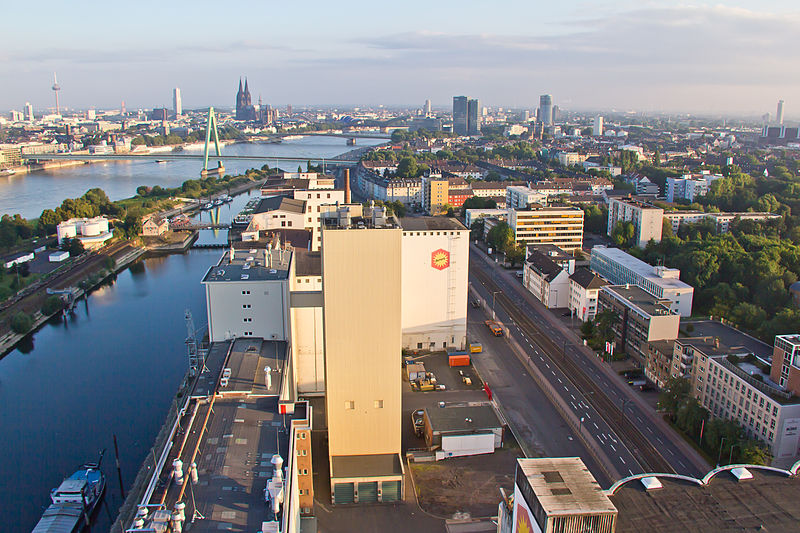 It is only a 2 km distance from the harbor development area in Deutz to Cologne cathedral. Photo by: ©Raimond Spekking / CC BY-SA 4.0 (via Wikimedia Commons)

There is still silence in the fallow land. Individual lots have already been cleared, but it will be at least another summer before the orchestra arrives with cranes and caterpillars. This is a tour with a special charm that we at koelnarchitektur.de can offer you here: A look into the past, where the future is knocking at the door. It is best to bring your bike with you! Or we can rent one for you. 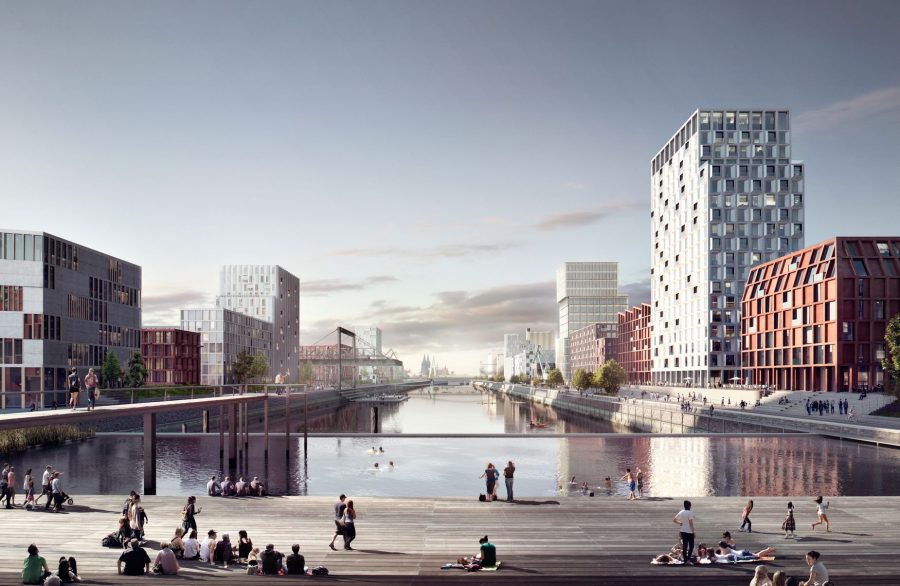 People in Cologne now dream with a swimming pool at the end of the harbor basin. Photo by: ©cobe