Brutalism in Berlin – a building cult

October 19, 2017 By anneke Events and exhibitions, News No Comments 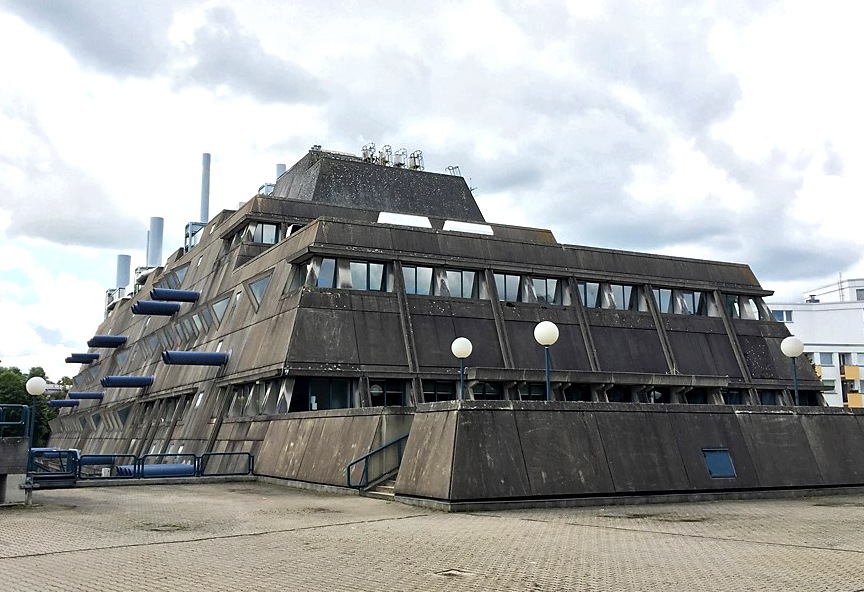 Hardly anything in the architectural history is more frequently misunderstood than the term “brutalism”. It doesn’t mean gloomy, brutal-looking concrete monsters, but buildings whose characteristics are raw, with unadulterated material and exposed construction. Although the style was born in the UK and the USA, Le Corbusier became the key figure as the great architect and visionary of the new era of the 20th century. With his late buildings, such as the La Tourette Monastery or the Unité d’Habitation (housing machine), he has created famous unique examples, and characterized the concept of brutality with his definition of raw concrete: “béton brut” – the architect’s marble. 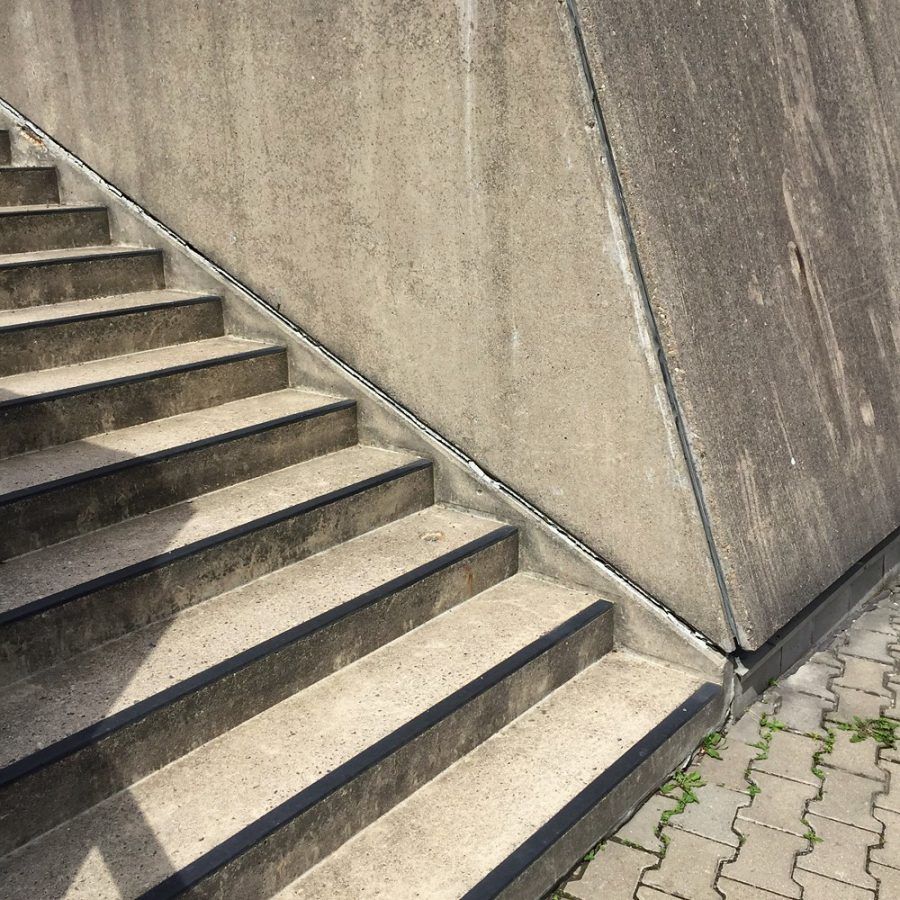 In 1955, the British architectural theorist, Reyner Banham, defined this important post-war period with three characteristics: formal legibility of the ground plan, clear presentation of the construction and appreciation of the materials “as found”. The curator of the German Museum of Architecture in Frankfurt (DAM), Oliver Elser, adds a not inconsiderable criteria: the artistic aspect. Not every concrete car park and middle-school-center of the 60s built with visual concrete deserves to be lifted into the heaven of the brutalism icons. And many of these brittle, often unloved witnesses of the post-war period are threatened by demolition. Only slowly do the planning authorities of listed monuments discover the gray giants. They are often in bad condition, unused or even contaminated by asbestos. 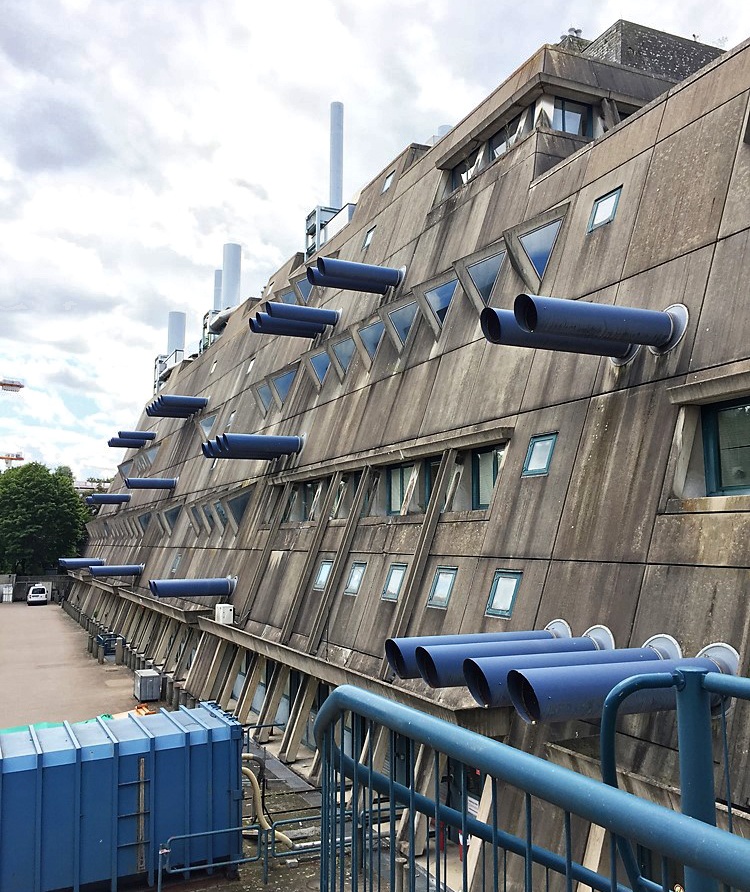 Under the hashtag “SOSBrutalism”, the DAM documents more than 1,000 examples worldwide in a kind of “red list”. On November 9th, a large exhibition opens, a book will be presented and the interest in both is already huge.

In addition to the Regina Martyrum church in Charlottenburg, the Czech Embassy in Mitte, the Ex-Rotaprint building in Wedding, the Deutsche Oper in Charlottenburg and the Akademie der Künste in Tiergarten, Berlin has very impressive brutalist buildings. The undisputed highlight, however, is the church of St. Agnes by Werner Düttmann, rebuilt by Arno Brandlhuber as a gallery. In short: lucky for the city that still functions at a high level, also thanks to successful renovations, both privately or publicly financed.

However, one patient is dying: the “mouse bunker”. 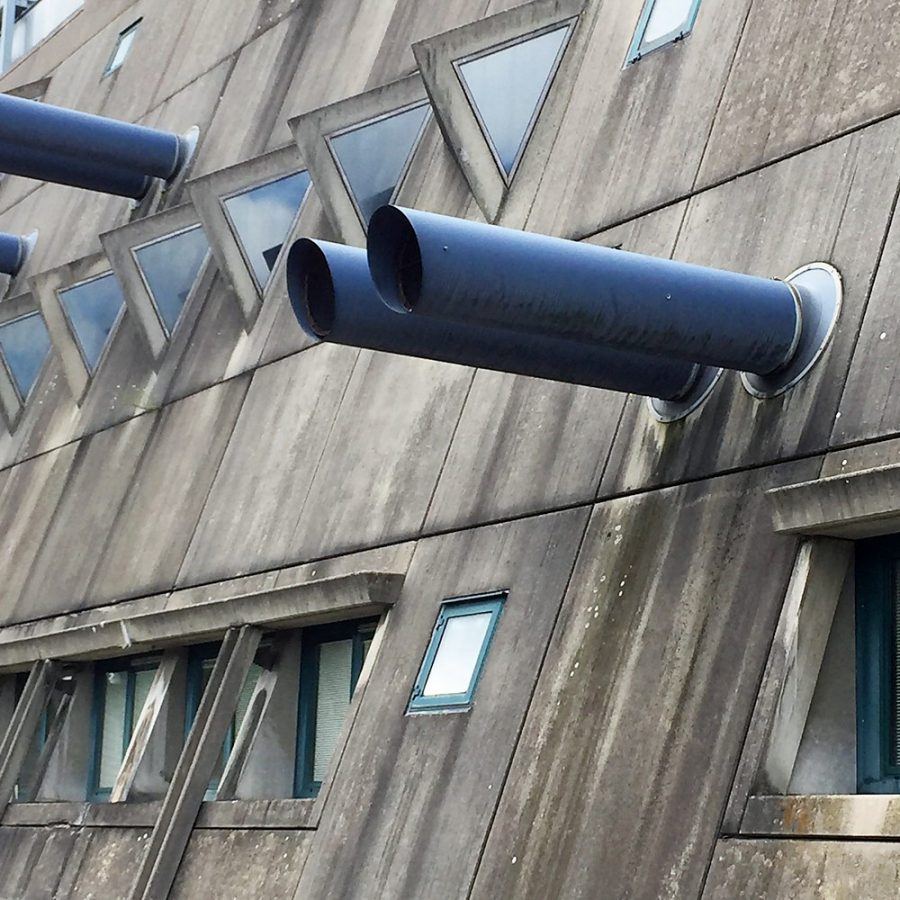 A detail of the building, showing its ventilation pipes and special reliefs. Thomas M. Krüger.

In between “Twenty thousand leagues under the sea” and “Star Wars”

The Mouse Bunker building, not in use since 2010, is the former animal testing laboratory of the Charité of Gerd Hänska, built in 1970-82. It looks like an imperial star destroyer, with its raw concrete façade and unadorned window bands, prominent ventilation ducts and visibility slots. It would not surprise anyone if Captain Nemo or Darth Vader was found on the command bridge. The owner has shut himself off, wanting to get rid of the bulky thing, with trespassing forbidden!

Reuse will certainly not be achieved economically. Here, higher powers must come. For the Instagrammer, the Mouse Bunker is already more than an insider tip. Perhaps social media can contribute to the rescue, in the form of crowdfunding for a new headquarters of computer nerds and whistleblowers.

Text: This article is a modification on the recent contribution to the subject of brutalism published in Berlin’s city magazine by Iris Braun and Thomas M. Krüger, founder of Ticket B, Guiding Architects’ member in Berlin.