Cooperative housing in the future – Together or Alone? 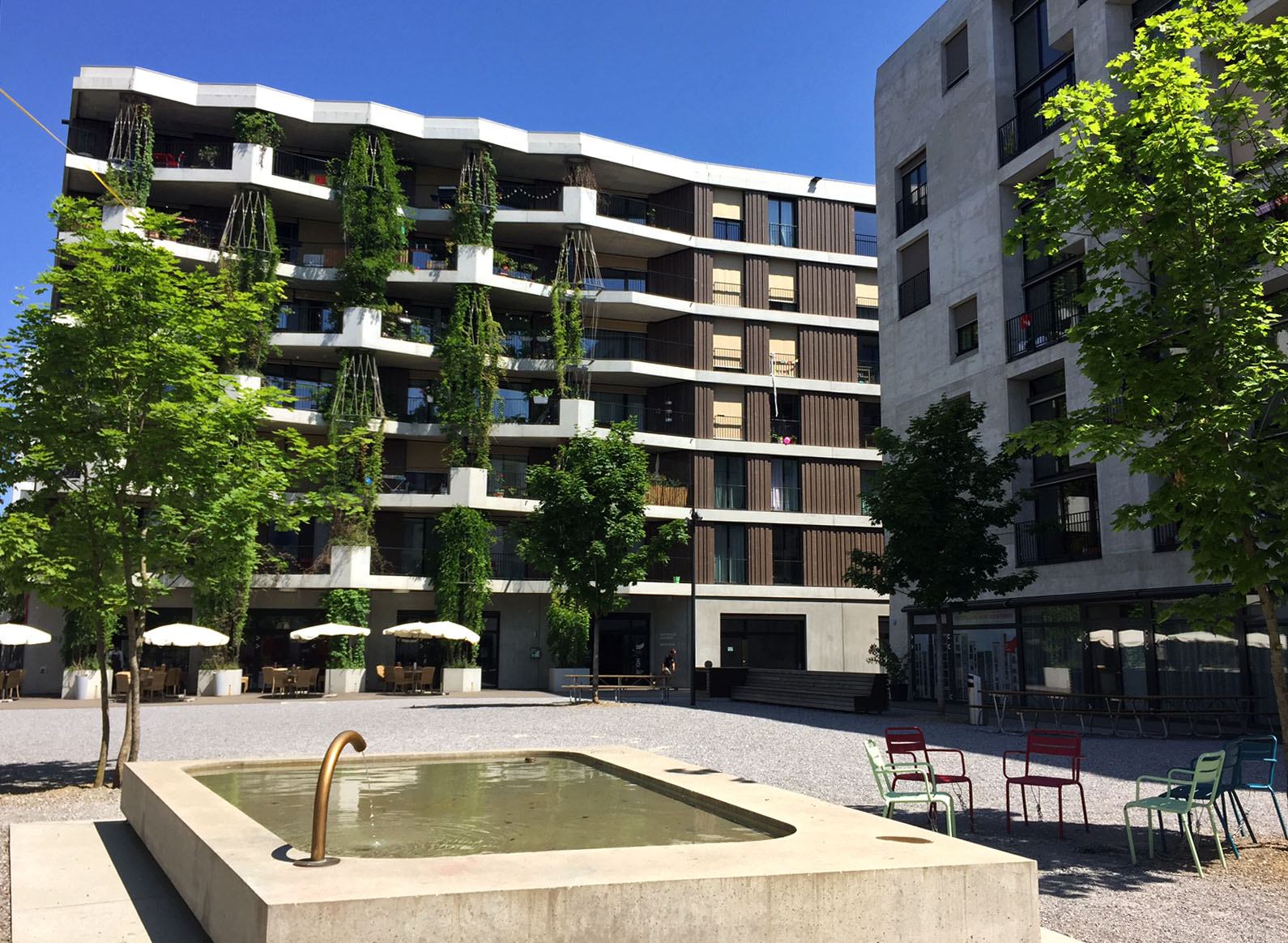 In Zurich, cooperative housing has a long tradition and, due to several new projects, it is often part of our architectural guided tours. Two new cooperatives – „Kalkbreite“ and „Mehr als Wohnen“ – come up with new ideas on how we can live in the future, dealing with the key question: “Together or Alone?”

Kalkbreite, centrally located, integrates a tram-depot and is built on top of a three-story high hall. A public courtyard on the 3rd floor serves as entrance-level and playground. The unique block is like a small city with public services such as childcare, a medical-center, a cinema, bars, restaurants, shops and offices. Those are situated in the first three levels, while the apartments surround the courtyard up to five stories. 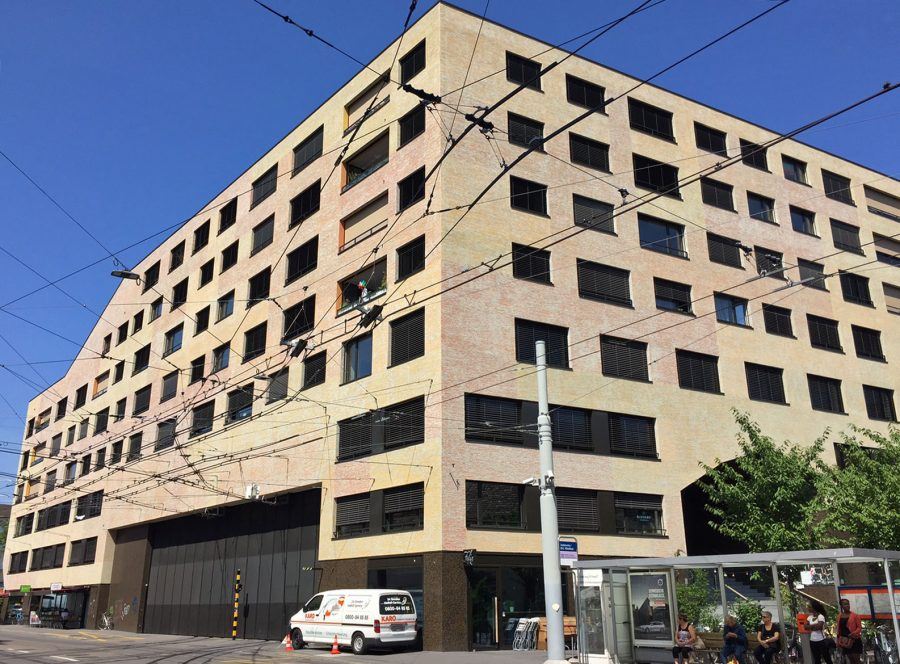 Kalkbreite is a city in the city: 250 people living in 55 apartments with 97 living units on the top of a tram-depot. Copyright: Barbara Petri.

But what makes „Kalkbreite“ special?

Beside family-apartments, it offers a large mix of huge apartments with up to nine rooms, so-called clusters – each of them with its own bath, a shared kitchen and living room. All cluster-apartments together can use a common living and dining room for 50 people with their own cook. Regarding sustainability, this way of living saves energy and space. Each person has a maximum of 35 square-meters. Moreover, for guests there is an in-house bed & breakfast. This mix makes Kalkbreite so attractive and lively. 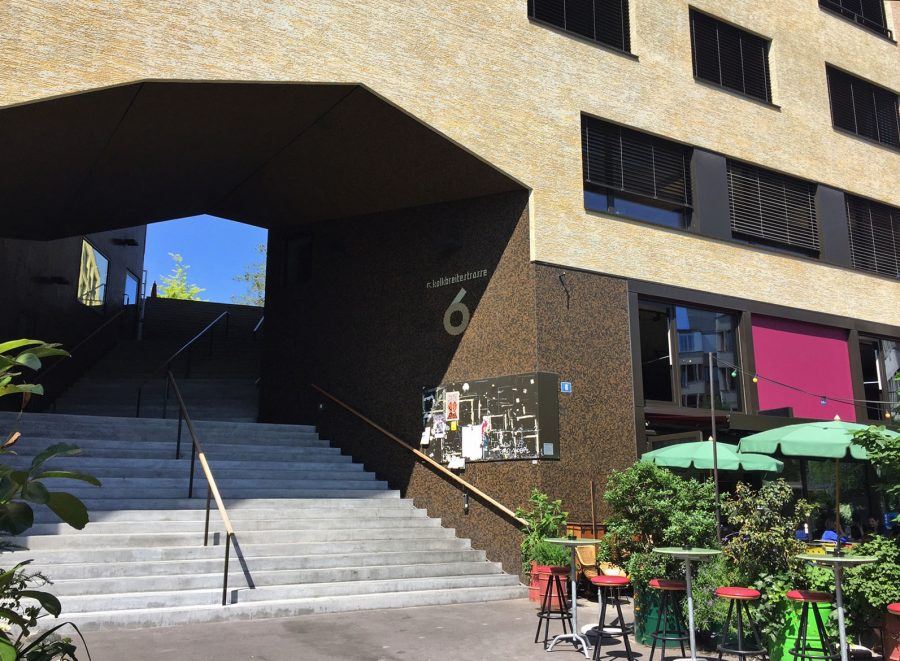 Stairway to the courtyard, which is a public and private space in one. Copyright: Barbara Petri.

How about „Mehr als Wohnen“?

Founded in 2007 as a birthday present for „100 years of housing cooperatives in Zurich“, the residential-complex „Hunziker-Areal“ was built in the district Zurich-Leutschenbach. The 13 townhouses offer space to live for 1200 people in 370 apartments, those being clusters or satellite-studios for patchwork-families, young singles or older people. It works very well for singles who like to share an apartment and still have the possibility to be independent.

Hunziker is more a district itself than a residential-complex, offering childcare, a bakery, shops, restaurants, bed & breakfast and different kind of working-studios. 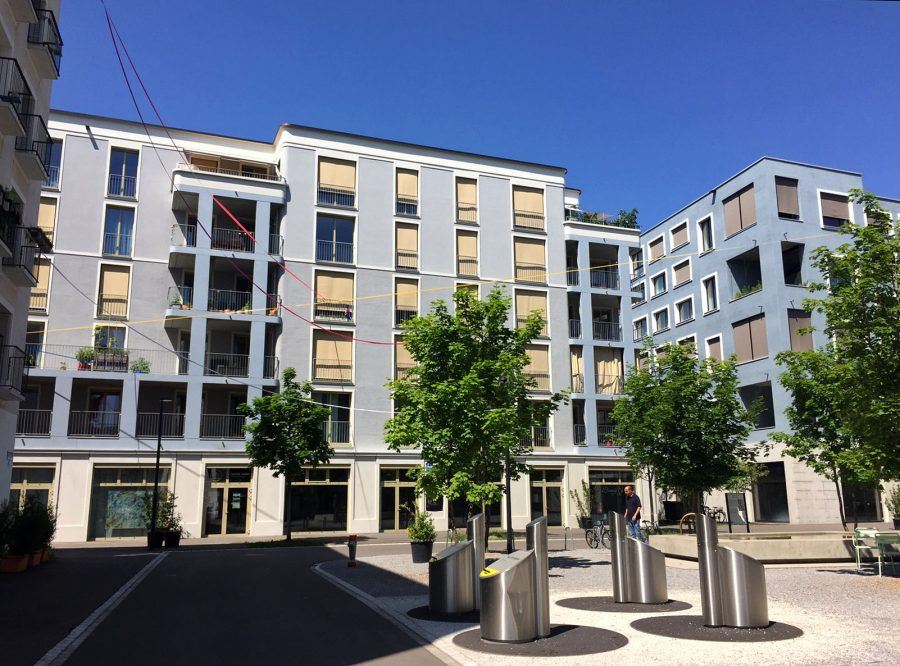 The so called “Stadthaus” – city house – by Miroslav Šik has the elegance of the city of Zurich and hosts 34 apartments for couples and singles around two courtyards. Copyright: Barbara Petri.

Both developments respect the aim of the 2000-watt society and do not allow inhabitants to have a car. However, public transportation works very well in Zurich, bicycles are becoming more and more popular and car sharing is available on site. 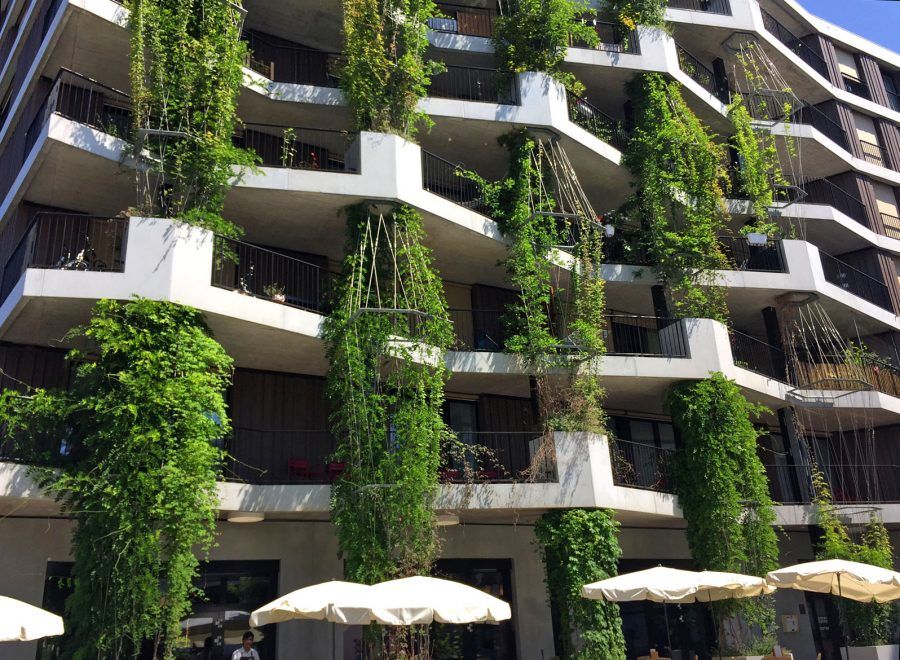 All buildings have names – this one is called “Der Pförtner”, which means “the porters’ lodge” – and, besides the 30 apartments, the complex hosts a restaurant, a guesthouse and the offices of the cooperative. Copyright: Barbara Petri.

The huge variety of different experimental apartments in Kalkbreite and Hunziker makes people aware of living together while having enough privacy!

First image: Two of the 13 buildings of the Hunziker Area facing the center square designed by the landscape architecture firm Müller Illien, which was part of the competition project. Copyright: Barbara Petri.

Kalkbreite: the new place to go out in Zurich?
Glamorous icon of the ‘70s by Niemeyer reopens after 22 years