More space for bikes and pedestrians, less space for cars: the makeover of Coolsingel in Rotterdam 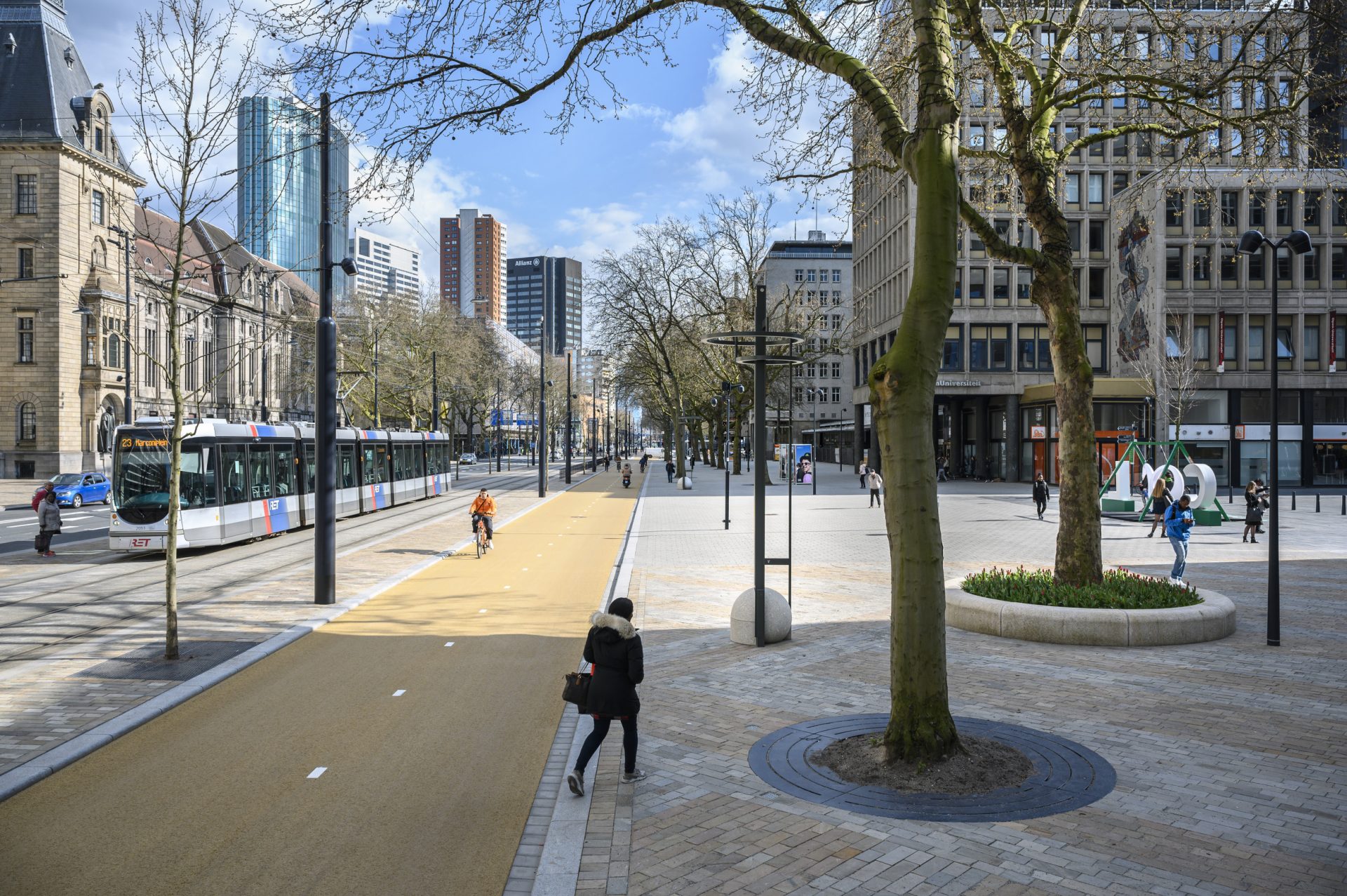 In the Dutch Monopoly game, the Coolsingel, as the third of the green streets, is one of the most expensive plots. In reality, too, it is a prominent address in Rotterdam: the street crosses the city centre from north to south, lined with office and commercial buildings, but also with the few public buildings that survived the bombing in World War II: the city hall, the old main post office and the stock exchange. What the Coolsingel lacked until recently, however, was livability. The pavements were cluttered with numerous snack pavilions and unattractive street furniture. Next to the pavement was a narrow cycle path and next to that, two car lanes on each side, flanking a central tram line. Every day, 22,000 cars roared along the Coolsingel at up to 50 kilometres per hour. That has now changed thoroughly thanks to a 58 million euro redesign designed by West 8. 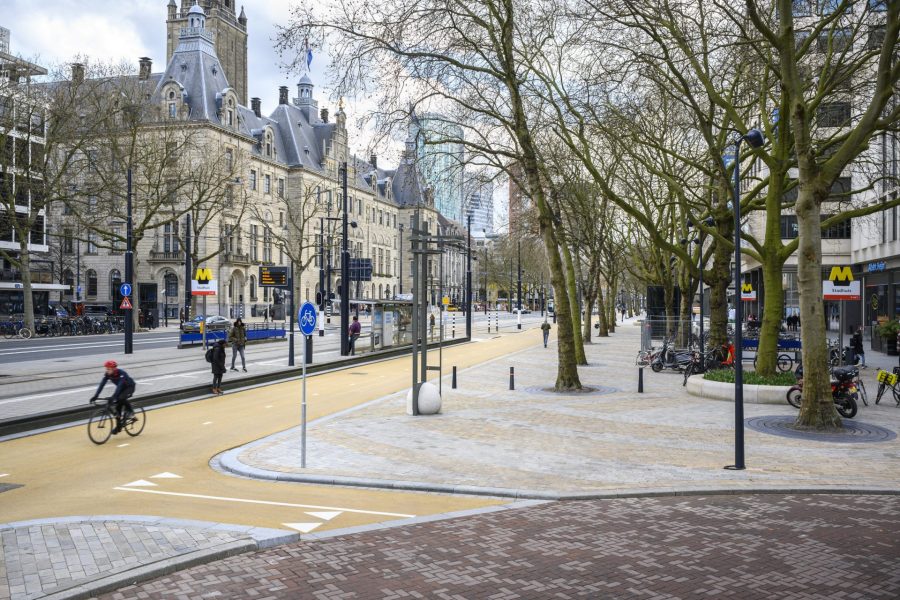 Originally, the Coolsingel was one of the canals that formed the fortifications of Rotterdam. Between 1913 and 1921 it was filled in and the resulting boulevard was lined with a series of prestigious public buildings, later followed by hotels, cinemas and department stores. After the war, the reconstruction aimed at making the city centre more car-friendly and turning the Coolsingel into a main traffic artery.

From car-friendly metropolis to city lounge

Since 2008, however, the city council of Rotterdam has taken the opposite course and wants to turn the city centre into a “city lounge”. In the modern port city, the call for cosiness has become louder and louder, which is why the city is now investing in measures to calm traffic and upgrade the public space. Accordingly, the Coolsingel is no longer to serve only as a through route, but above all to be part of an S-shaped walkway from the gallery mile Witte de Withstraat to the retail street Meent.

To this end, West 8 had the west side laid out as a wide boulevard. The pavements, which are now largely free of pavilions, are paved with Indian sandstone, the beige colour of which matches the sandstone, travertine and dark brick of the buildings. 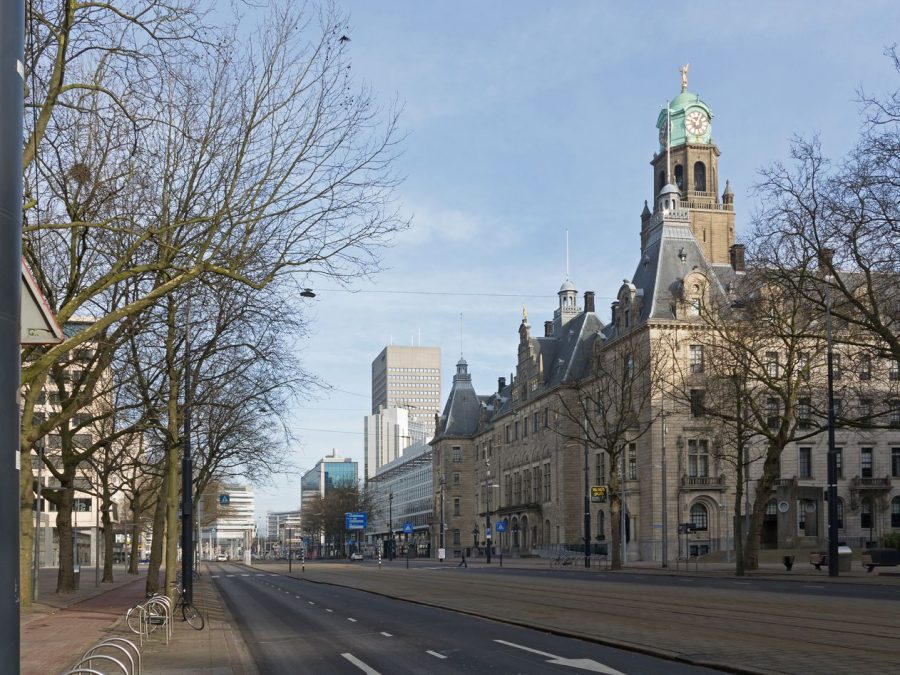 Coolsingel before the redesign (2016). Photo by: ©Michielverbeek/Wikipedia

Although some old sycamore trees were felled, new ones were also planted, so that in the end there are 38 additional trees along Coolsingel. Round benches, raised planting beds with seating edges and ornamental light elements, which West 8 designed especially for the Coolsingel, complete the picture. On the west side of the street there are two black asphalt lanes for cars, which are only allowed to drive a maximum of 30 kilometres per hour. On the east side is a 4.50-metre-wide, beige asphalt cycle path, also with two lanes. Its colouring is unusual and testifies to the special status of the Coolsingel, because the asphalt of Dutch cycle paths is normally red. Under the pavement lies a drainage system, letting rainwater infiltrate directly into the ground instead of into the sewerage system.

The new Coolsingel, on which there will be only half as much car traffic as before, wants to be a hinge instead of a barrier in the urban space. The only thing that has not changed is the tram line, which has been left in its central location for financial reasons. 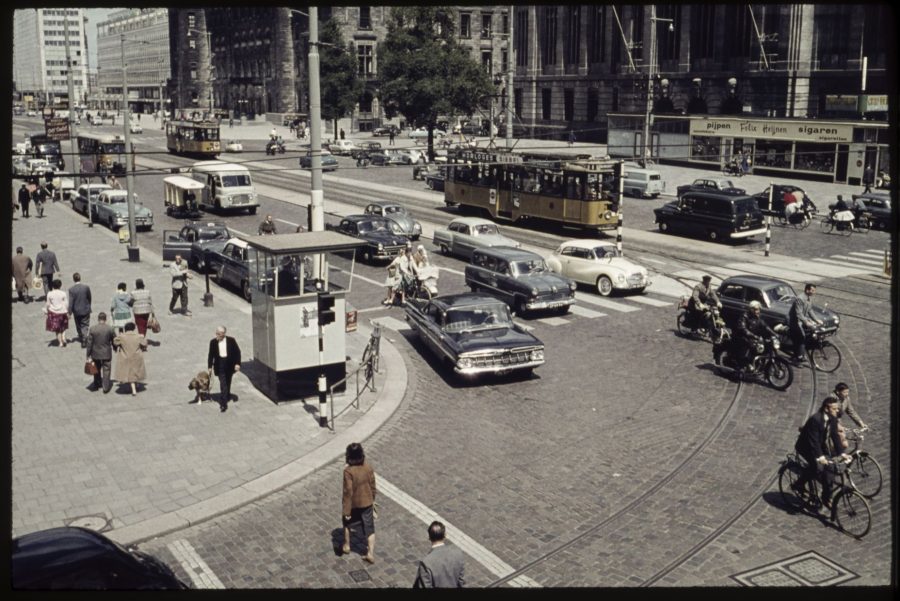