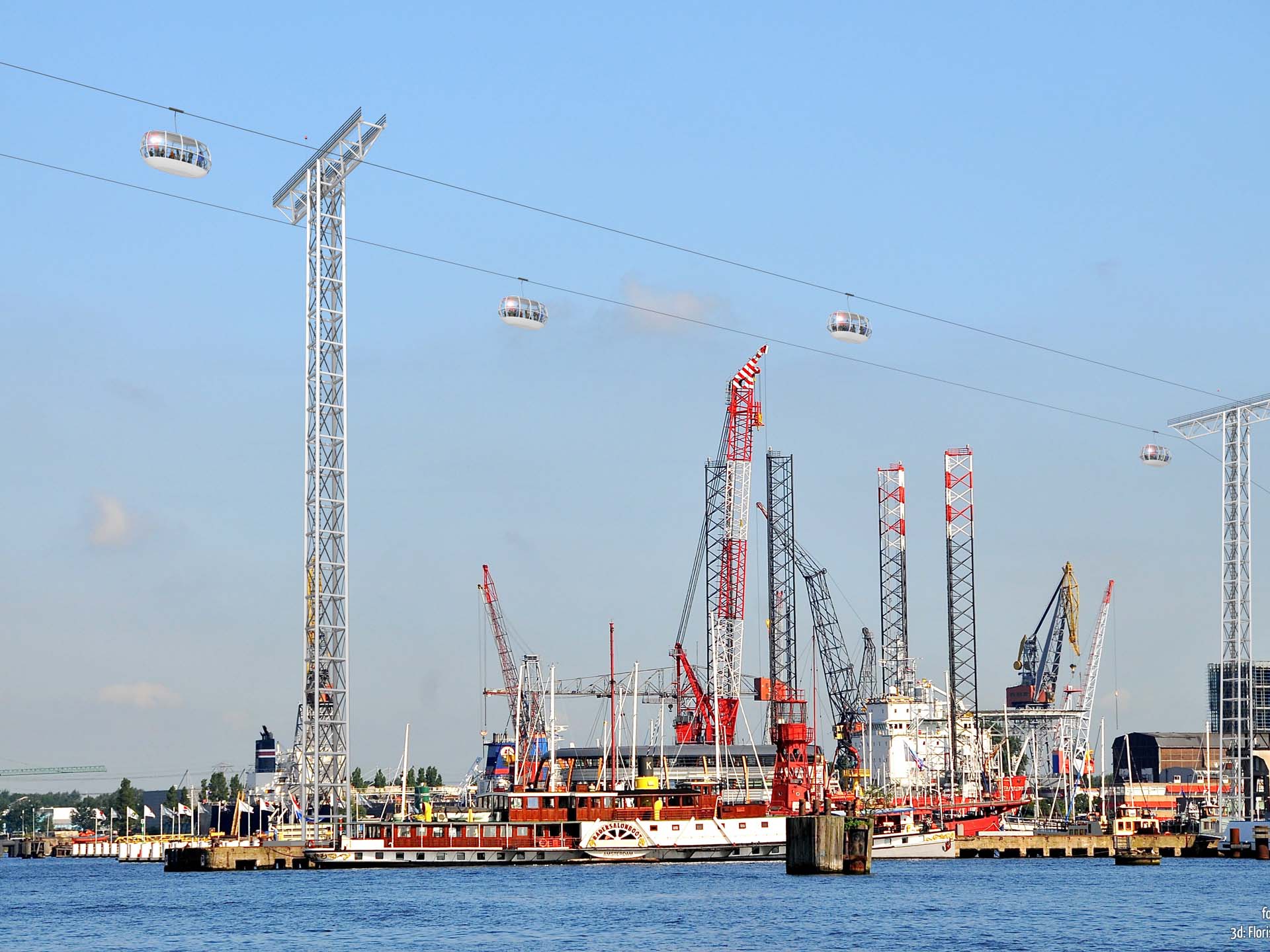 For many centuries, the city of Amsterdam lay on the southern shore of the Northsea inlet Het IJ. Whenever the city needed an extension, a semicircle was added to its layout, producing an urban structure that resembles the growth rings in a bisected tree trunk. Amsterdam kept growing in southern direction, while the waterfront of Het IJ formed a fixed border in the North.

As early as the 19th century, however, the first plans for bridges across Het IJ were made. Merchants from the countryside villages in the North of Holland wanted to bring their goods to Amsterdam and developed various designs for bridges – which were all rejected by the municipality. Even when the Northern shore finally became part of the city and the first harbour activities and harbour workers’ housing areas were developed in the 1920s, there still was no question of building bridges. Due to the low social status of its inhabitants, Noord was regarded as something like the Australia of Amsterdam: the place where all the dropouts, the poor and the petty criminals were shipped, safely separated from the city by the water. In addition, the city centre was densely built-up and did not offer any space where a bridge could have landed.

One of the World’s Coolest Neighbourhoods

Today, there still is no built shore connection in central Amsterdam. The only bridge lies to the East of the city, and the three tunnels built in the 20th century are all reserved for cars. Pedestrians and cyclists who want to cross Het IJ have to hop on one of the various ferries – which are becoming more and more crowded.

Over the last few decades, Noord has become increasingly popular. First came the creatives, attracted by deserted shipwharfs and harbour buildings, then more and more other Amsterdamers followed, lured to the former no-go area by relatively affordable housing space. Now gentrification is in full swing, and in 2020, the district even made it onto the Time Out list of the World’s 40 Coolest Neighbourhoods.

In the face of these developments, the city started to think about built shore connections again. A first plan, made in 2017, envisaged the construction of an underwater tunnel behind the Central Station as well as two new bridges to the West and East of the station. Several architects felt inspired and made unsolicited design proposals for new bridges. The Dutch national government, however, was worried that the bridges would form obstructions for the heavy shipping traffic on Het IJ, which serves as a connection between the Amsterdam-Rhine-Canal and the North Sea. For two years, the discussion ground to a halt. In 2019, an independent commission was instated and received the task to develop its own proposal, in order to resolve the impasse between government and municipality.

In June the commission, headed by Flemish urban planner Alexander D’Hooghe, published its advice. The proposal defines two types of shore connection: ferries for local links and bridges for links of regional importance. A new bridge for pedestrians, bikes and tram is envisaged in the Houthaven area in the West of the city, another in the Eastern Docklands. A pedestrian tunnel behind the Central Station, two new ferry connections and the widening of the existing bridge in the East of the city complete the plan. An additional link could be a cablecar connection in the Western harbour area, for which architecture firm UNStudio has already created a design. This could be linked to the new location of the cruise terminal, which will have to move to the Western habour according to the proposal. Now the big question is whether both the municipality and the national government will accept the advice of the commission and start making plans for its implementation.

Design for a “living bridge” across Het IJ. Rendering by ©Dominik Philipp Bernátek

When Anneke Bokern and Paul Vlok of architour, the local Guiding Architects partners, realized that many Amsterdamers did not really know the locations for future shore connections, they developed a 3-hour guided tour on the ‘Jump across Het IJ’ and marketed it in collaboration with architecture centre Arcam. In September and October, individual guests could join the bike tour, during which they visited all the past, present and future locations, heard about the plans and had lots of opportunity for discussion. The tour was a great success and was sold out for several weeks in a row. 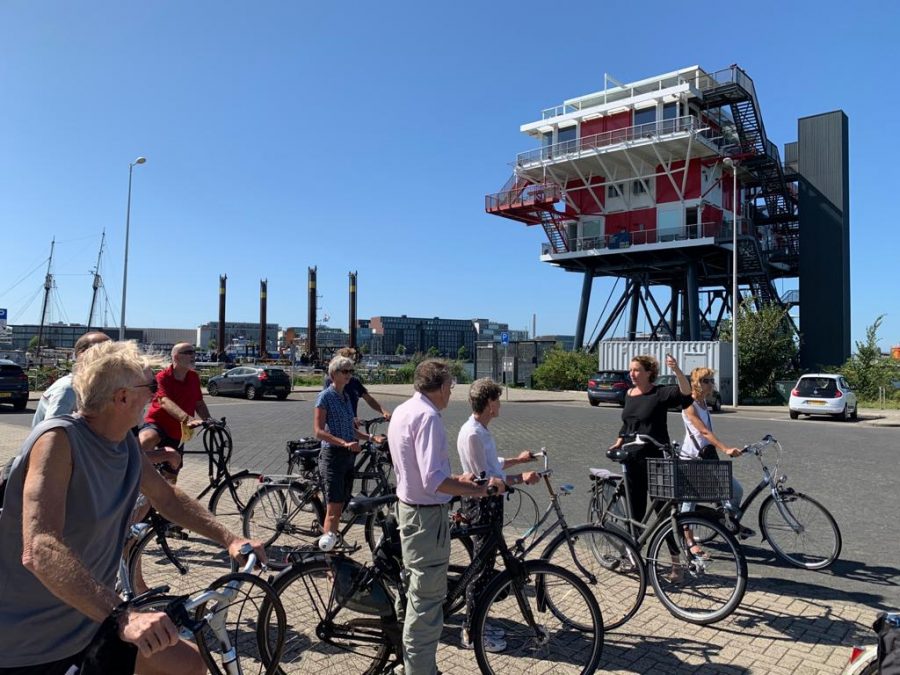 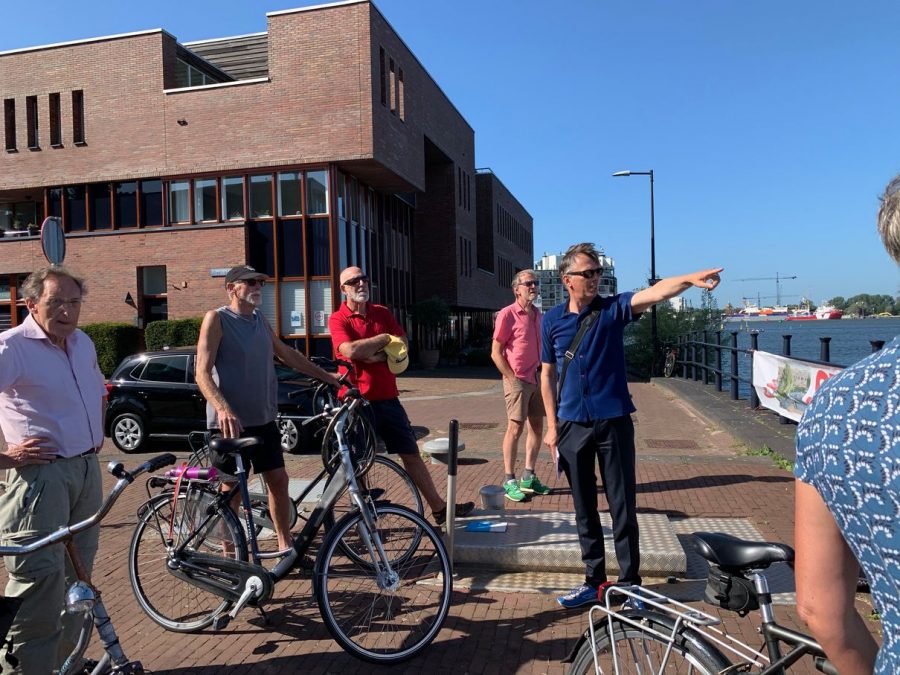 Paul Vlok in the Eastern Docklands during the Jump Across Het IJ tour. Photo by ©architour

Currently the tour cannot be offered due to Dutch Covid regulations. But as soon as it is allowed again, architour will restart the Jump across Het IJ – in the hope that as many people as possible can form an opinion on this important spatial and infrastructural question.