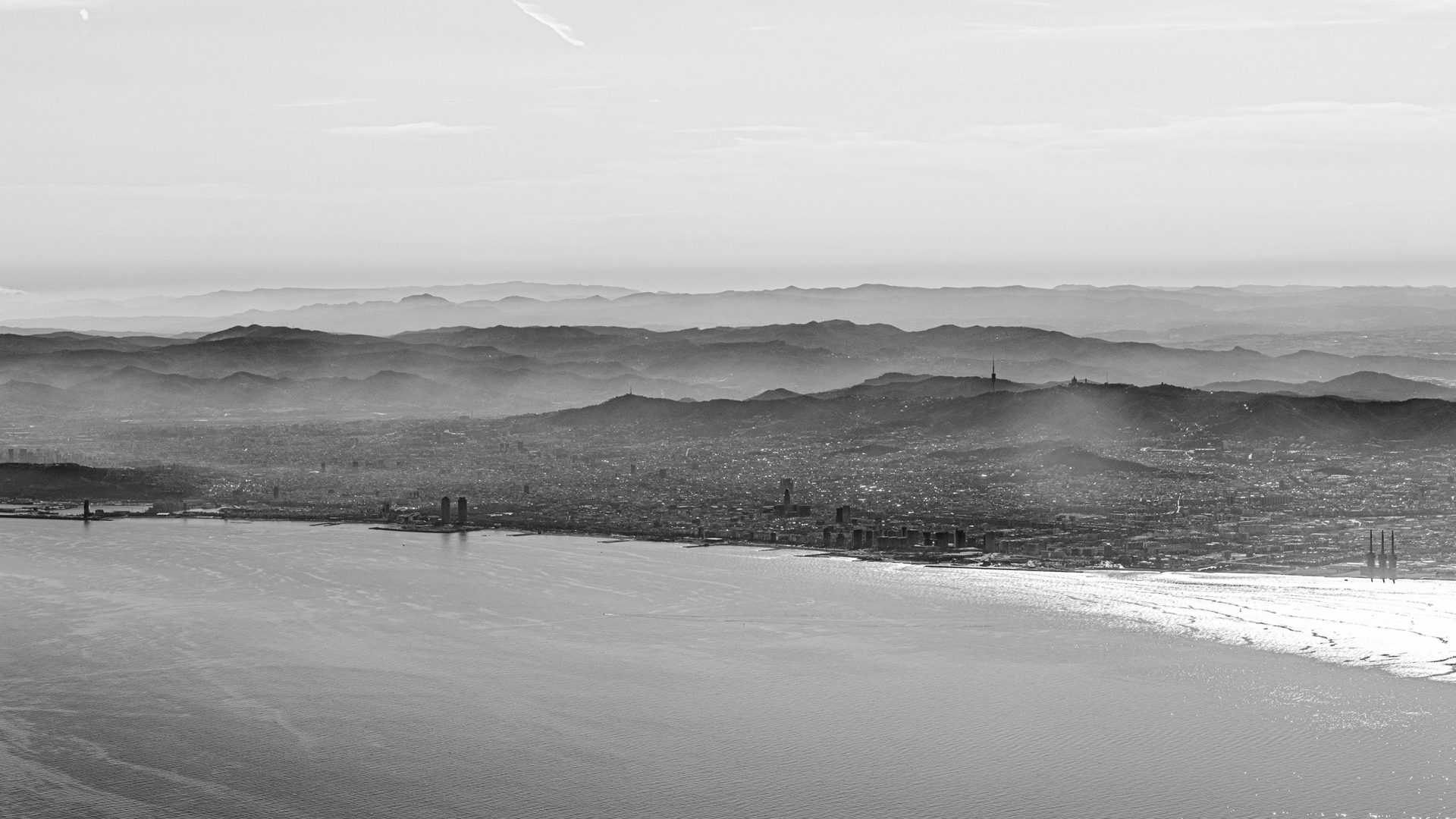 It is that fleeting moment. Shorter than an unconscious blink of an eye. Barely a five hundredth fraction of a second. Just then it happens. Not a little before, not a little after; everything gets frozen. The measuring of time and space.

The moment comes to rest, loses speed. Allows us to recognize the smallest details at a standstill. To be puzzled by the unfamiliar appearance. To search for answers to irritating details. To question, reject, reformulate theses.  Often resulting in being too imprecise again, they allow for even closer inspection. Only silence and motionlessness give us the opportunity for reflection in our fleeting world. 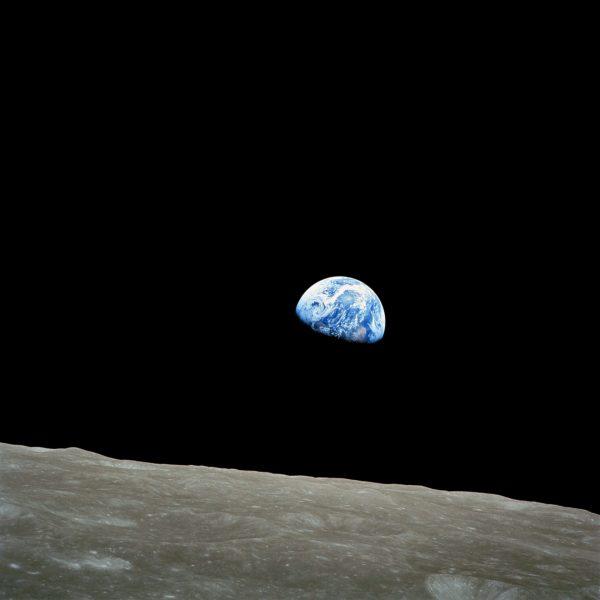 NASA-Apollo8-Dec24-Earthrise
Photo of the Earth taken from Apollo 8, called Earthrise (1968).

“For here am I sitting in a tin can, far above the world, Planet Earth is blue, and there’s nothing I can do”, sings David Bowie in Space Oddity. Ever since astronaut Bill Anders shot his famous picture of the globe rising on the lunar horizon on board Apollo 8 on December 24, 1968, we have understood the world as a subject. “Oh my God, look at that picture over there! There’s the Earth comin’ up. Wow, is that pretty!” (Bill Anders). The blue glowing sphere stands out against the black nothingness. Suddenly, we can contemplate our world, of which until now we have always been an integral part. This initial view from a distance for the first time makes us realise the fragility of the planet and also gives rise to the green movement, many years before Greta Thunberg was born.

Our rocketman, however, is not Bill Anders, but Jon Tugores, an architect and airline pilot from Barcelona who combines two seemingly disparate professions. With his boots in the mud of the construction site. In a blue blazer 10,000 meters above the sea at high speed on the approach to the vibrant metropolis. The earthbound, the bird’s-eye view, united. The sum of these professions is more than double. It has sharpened his vision of both the details and the big picture.

One might object that thanks to Google Earth it is no longer necessary to go up into space. At home, we can comfortably roam the world on the screen, even dive into the depths of the oceans or circumnavigate the moon, imitating Bill Anders. We can also go back in time to see what the photo diary of the past reveals. Through Google Earth we position ourselves exactly where and when it matters to us. Idealised, purified, optimised.

Jon Tugore’s panorama presents itself with much more complexity. His focal point is defined by the routes determined by the air traffic controllers, the exact moment by the flight plan. Only rarely does Jon manage to sneak in a small modification. Even though his camera is always ready and the cockpit window crystal clear: Suddenly, clouds appear in front of the object, pile up over the city, rain fronts prevent the desired picture. How is it even be possible to distinguish anything in blind flight? His art consists of capturing the fleeting moment. The rest is up to the world. 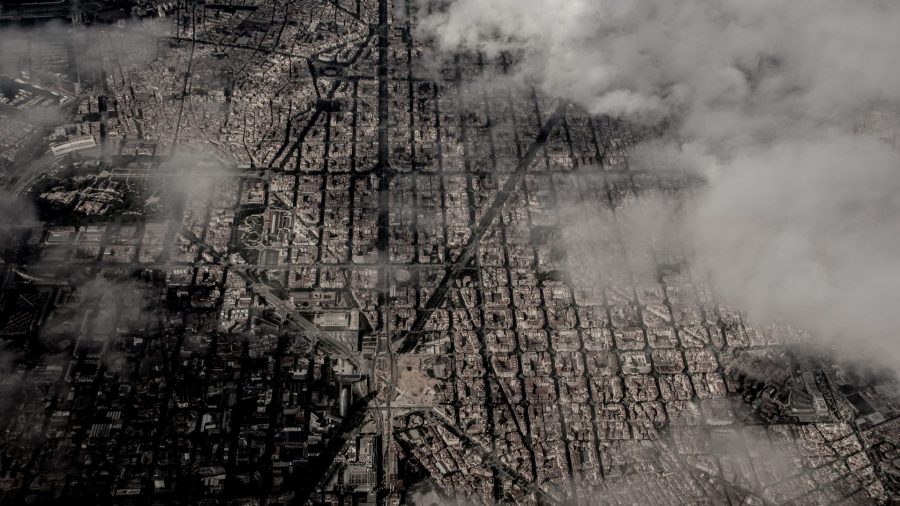 These are definitely not Google Earth images cleansed of all clouds. There is rain, lightning and thunder, turbulence shakes us, and all too often the vague path is sought through the unknown, the blurred, the inexplicable. The pilot, the photographer, the architect, the observer, the accompanying passenger, all are jolted. Haze descends in front of us, hiding the object behind a veil. The real world is rarely clear, doubts and uncertainties are more present than we would like. Likewise, Jon Tugore’s pictures of Barcelona often only vaguely reveal the object. In the world of the viewer’s thoughts, in the merging of momentary observation and awareness, with the desire longing to see, something new and unique is formed. In this way, each individual constructs his or her own Barcelona. The imperfection, caused by the meteorological and aeronautical adversities transforms Jon’s images into poetry. 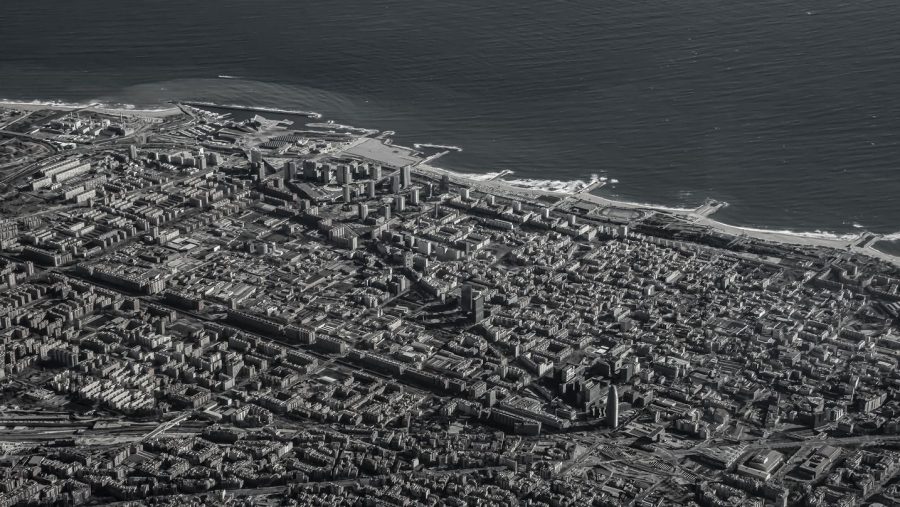 But the bird’s-eye view of the Eixample also allows us to recognise another phenomenon. The user of the city perceives the block merely in its negative volume. We see streets, at best courtyards. We see emptiness. The real essence of the Eixample, those endlessly repeating built blocks of 113 x 113m, can only be perceived indirectly. Only the view from a height or the abstract vision of a city plan makes the actual essence comprehensible: The built volume that defines the outdoor spaces.

Visionary and engineer Ildefonso Cerdá predicted technological progress in 1886. The 20-meter wide streets of the Eixample plan are the result of his analysis of transport systems moving at different speeds: steam-powered trams, horse-drawn carriages, load carriers, pedestrians, and then underground water and sewage pipes. All transport flows are separated from each other and allow movement at optimised speed. A conceptual vision that, surprisingly, was able to absorb the incredible invasion of private car traffic from the 1960s onwards.

The history of our civilization is, to paraphrase Paul Virilio, an unstoppable process of technologically induced acceleration. Of course, Cerdá knew nothing about cars or airplanes, let alone Apollo 8, but his plan has outlasted everything, in an almost unsurpassable permanence[1]. However, according to Virilio’s thesis, due to immediate communication through the Internet, sitting motionless in front of the computer, we will soon enter the age of “frenetic standstill.” The unbroken progress of acceleration is threatened by total regression.

Jon Tugores’ frozen high-speed photographs of Barcelona are the optimistic, poetic image of our time. ” There are eyes everywhere. No blind spot left. What shall we dream of when everything becomes visible? We’ll dream of being blind.” (Paul Virilio). 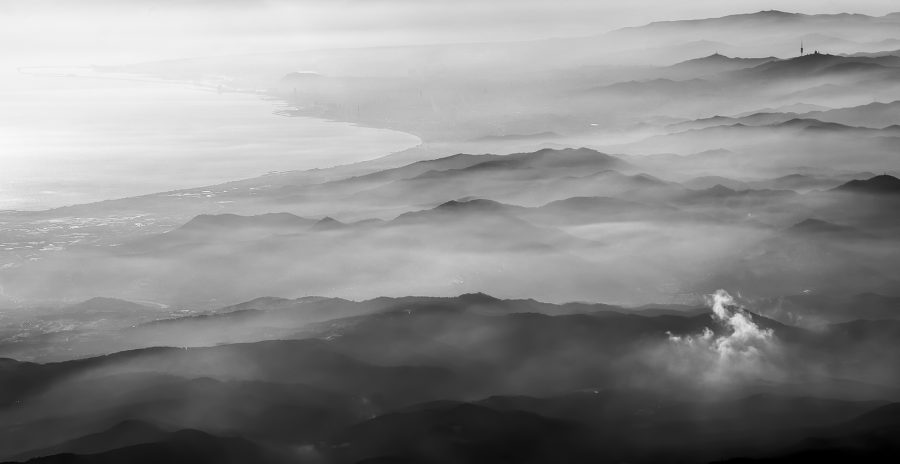 [1] We refer to Aldo Rossi’s concept of permanence

The “Bellevue di Monaco” - Munich's popular meeting point for the interaction of locals and refugees
Warsaw, architectural tour through a multi-layered metropolis